↓ Skip to Main Content
Home › Finance › Crowdfunding › ICOs, Exotics and Platforms – An Insider’s Perspective on the Future of Venture Capital

ICOs, Exotics and Platforms – An Insider’s Perspective on the Future of Venture Capital

Is the VC industry at a crossroads?

What are the root causes of problems in the VC industry?

How can the future of venture capital shape up?

How Can the Future of Venture Capital Shape Up?

Despite increased access to information, the best funds and venture analysts will still retain the intangible skills of being able to parse wide swathes of information and find the best deals. One way that the VC fund of the future could stand out, get to the front of the queue on deals, and be efficient cost-wise would be to use big data to greater effect. This is something that may be scoffed at by purists, but a tandem approach of quantitative with qualitative decision making would allow funds to spot leading indicators quicker and mitigate biases.

Chart 6 below shows what InReach Ventures achieved using proprietary machine learning tools to build dealflow in Europe. Within a year, it collated over 95,000 companies, of which 15,000 were reviewed and then 2,000 engaged with. It also allowed them to spot a hidden gem called Oberlo, which was later acquired by Shopify. 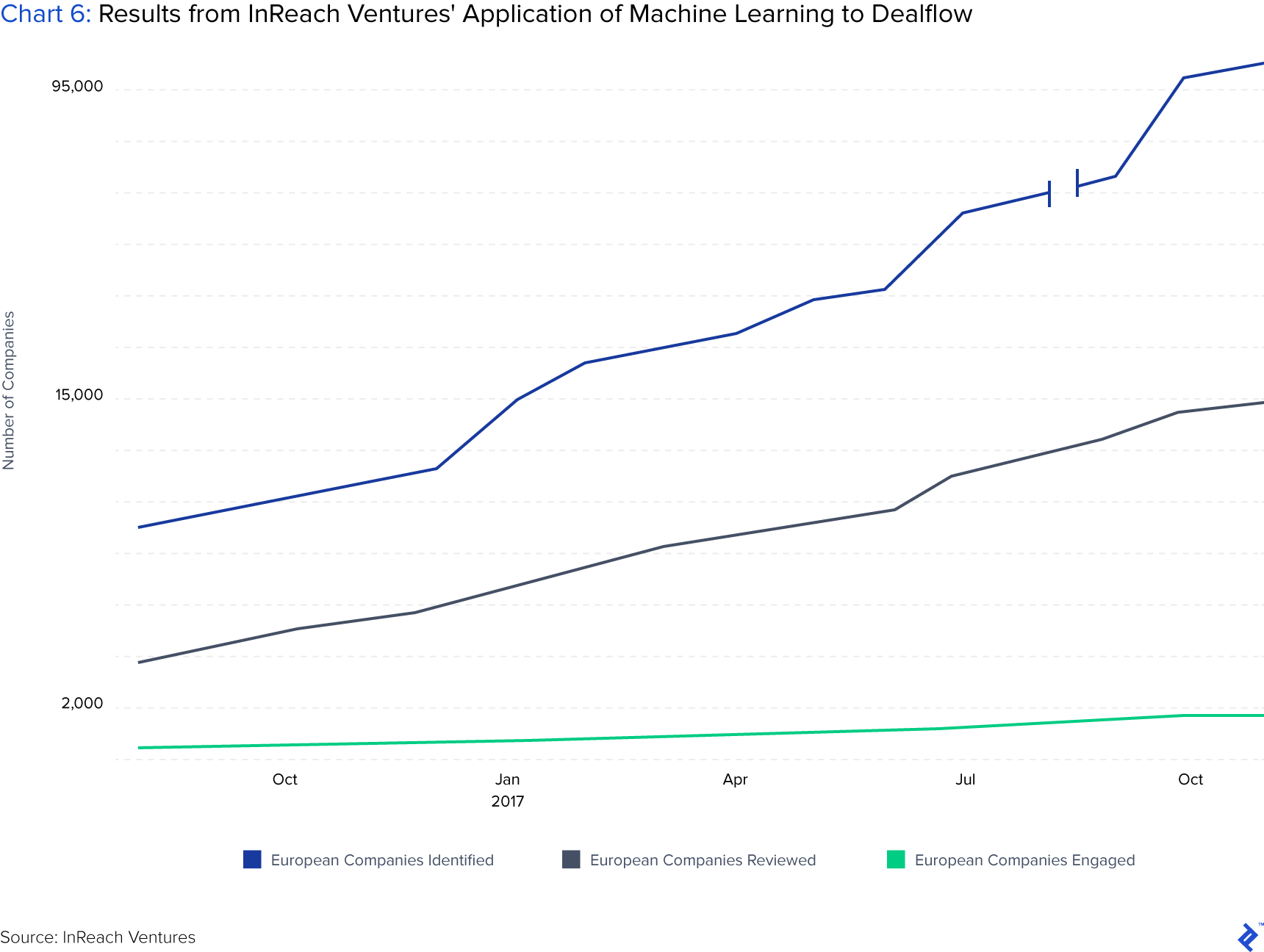 Arguments against this would cry “this is a quantity over quality approach!” But I think this displays an interesting angle to overcoming behavioral biases and showing how the VC industry could scale.

Social Capital has tested an initiative it calls “capital as a service,” which aims to automate the investment pitch and decision process. Startups apply online and go through selection steps without any human intervention. Its initial results showed some interesting contrarian trends that give credence towards giving all startups a level playing field with an objective non-human filter:

“In our pilot, we evaluated nearly 3,000 companies and committed to funding several dozen of those, across 12 countries and many sectors, without a single traditional venture pitch. In fact, in most cases, the data-driven approach allowed us to reach conviction around an investment opportunity before we ever even spoke to the founders.”

If Investing in Talent Is Key, Then Find It Earlier

The earlier that you spot and invest in a startup with potential, the better. Historically, that would constitute making a set of small seed investments, then following on the winners in later rounds. Yet as investment rounds have gotten bigger, the concept of “historic seed” has become Series A, and now pre-seed is seen as the path to being the first institutional check in a company.

Being the first check is one of the best differentiators that an active VC investor can take to stand out and outperform newer, less experienced investors. One way that VCs can take this even further is to go back even earlier, before the pre-seed round… to before the startup has even been born.

Finding inspirational talent that does not yet have an idea could be one part of the future of venture capital. Taking an equity stake in their “future idea” would be a way to encourage raw talent to go away with the backing some financial resources and see what they come up with.

Human talent is regularly seen as the core ingredient of success in a startup, superseding the business idea. A Gallup study claimed that highly talented entrepreneurs outperform their peers in year-on-year profit growth by 22%. Finding and connecting talent does not go unnoticed, VC Mark Suster defines his job as being the “chief psychologist” and claims that:

“We’re supposed to be good judges about which entrepreneurs and executives have both the most clever ideas and the right skill sets to do transformational things against all odds.”

Company builders have followed this style to an extent, but the great talent that they have are never the “true” owners of their business because they are salaried employees with reduced equity ownership. Spotting talent is what VCs do best, and they should go to the habitat of talent and get in their ear before they even have an idea.

Get Leaner, Go Earlier, and Get Focused

Despite middling returns, venture capital remains a glamorous industry. For many, it offers the intersection of financial dealmaking with the ability to make tangible and positive interventions post investment.

The growth in popularity of the VC industry has seen new funding competition emerge and behavioral preferences change, which can be incongruous to the traditional model of venture capital. I’m not saying that the industry is going to die out at all—instead, just making a case that certain changes could be made to ensure that LPs get a good deal and VCs deploy their talents in an optimal way.

My vision of the future for the “rest of the pack” is that a combination of the following will occur:

The emergence of ICOs could act as the catalyst for this change, and I for one hope that VC retains its relevance. What makes now an important time to act is that the fortunes of VC will be tied to the ICO market and, through a misconception of association, VCs will be tarred with the same brush of any scandals that arise from them.

What is venture capital and how does it work?

Venture capital is equity financing provided to high-risk companies with high growth potential. The goal of a VC is to realize a return by selling their shares when the company lists on a stock exchange or is bought by another.

What is an ICO?

An initial coin offering (ICO) is a fundraising issuance of tokens that functions as a currency within the issuer’s blockchain project. The behavior of these tokens functions similarly to shares in that they reflect the underlying fortunes of the business.

What is an IPO exit strategy?

Planning to exit via IPO means a business has an end plan of issuing its stock on the public markets and providing its private backers with a liquid market with which to sell their equity to public market investors.

What is the difference between angel investors and venture capitalists?

Angel investors are typically private individuals that invest their wealth into startups at the early stage of their lives. While venture capitalists also invest in such companies and stages, their source of capital is generally not their own. They act as investment managers for other investors, known as LPs.

Alex is a London-based CFA who has had a career across the world. He enjoys freelancing to keep abreast of industry trends and to reinforce his experience from venture capital, consulting and bond/currency trading. With a technical skill set and an engaging communicative touch, he is proficient at valuations and market analysis. His breadth of work has ranged from projects with the Bank of England to helping a jewelry entrepreneur to fundraise.