↓ Skip to Main Content
Home › About Me – Spencer Wolf

About Me – Spencer Wolf

Technology. Artificial Intelligence. Robots. Space … Well, those are just words without relatable, human-interest stories. If you want to know about me, with past and future thoughts… check out this heartfelt podcast video interview I was privileged to be a part of on SingularityWeblog.

Or, here’s a quick bio in print… 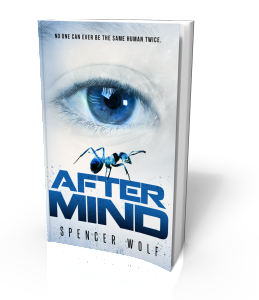 Spencer Wolf, author of After Mind, is a software manager and award-winning author. Many years ago, he fell in love with AI, future worlds, and living a lot longer than humans are supposed to after reading the adapted screenplay for Blade Runner from Do Androids Dream of Electric Sheep?

Spencer was a key member of the creative advertising team at Paramount Studios, serving as Interim Executive Director and working closely with senior management on dozens of feature-film campaigns. He has worked in data center design, converted jet engines to ground based power plants, and has swung a sledge hammer on construction sites. In his summation, humans need more life to pursue all their dreams.

Spencer earned his MBA from UCLA and his Bachelor of Science degree in Mechanical and Aerospace Engineering from Cornell University. He also spent one incredible year at the University of Sydney in Australia. Spencer currently lives in Minnesota with his wife, whom he met on travels in Austria, and his two children.

An excerpt of Spencer’s debut novel After Mind, entitled Technology Makes Two, was published in Calliope Magazine in 2014 and won third place in the magazine’s 20th annual fiction contest. He writes characters from the heart and is right now hard at work on his next Science Fiction novel.

He would love to hear from you.