Is there a NaNoWriMo Sales Tidal Wave Coming?

Something occurred to me…

November is the annual NaNoWriMo event where authors set a goal to write a complete novel of at least 50,000 words in one month. In 2013 there were 310,095 participants (ref. 1), from which, according to Writer’s Digest, 14 out of 100 completed their novel… or around 33,000 new NaNoWriMo novels were completed last year (2).

I’m an author who’s not participating in NaNoWriMo and have a book coming out in March. Am I, and the many other authors like me, about to get swamped by a tidal wave that’s tens of thousands of books high? Talk about elbowing for shelf space.

I tweeted this question { @SpencerWolfAuth } and it seems others are curious, too. So, I reached for my technical background hat and thought of the following to help figure it out and open the idea for discussion.

What if we ran a scan of all the new books released on Amazon that met the NaNoWriMo criteria of 50,000 words, which equates to 200 pages at 250 words per page? Then, we could look at page count versus release date. My hypothesis is we would see a spike or wave on our chart that relates to all the new NaNoWriMo novels. We could scan Amazon for all 200 to 225 page novels and then tally them by month of release. Is the wave coming in March? April? Here’s my idea in a graph: 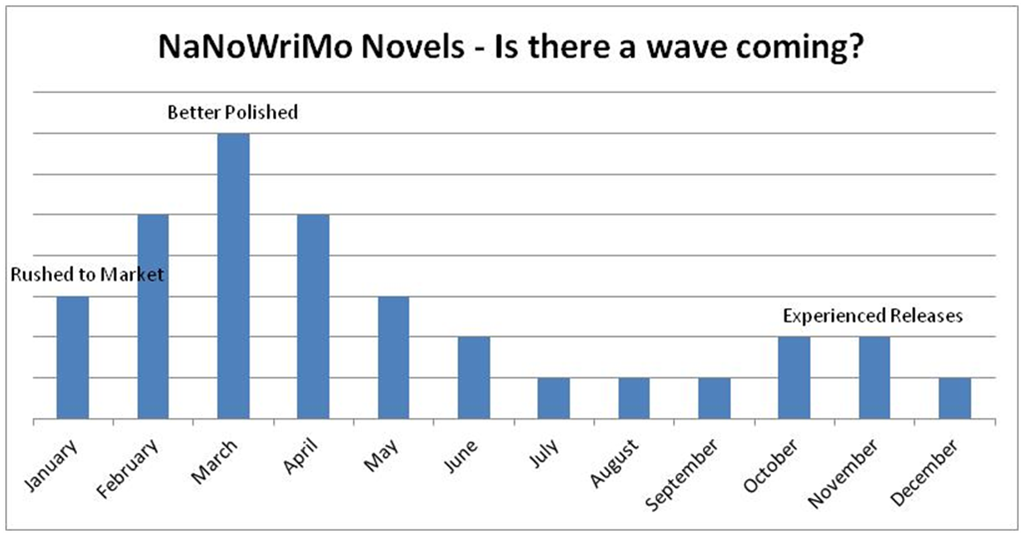 Note that I created the height of these bars to represent the month’s quantity of new releases.

I imagine the earliest releases in January will be those authors who are excited to have finished their books and will rush to get them online for sale. The March releases may be those authors who have been through NaNoWriMo before and took a bit more time to polish their work. And thereafter, we might also have those NaNoWriMo authors who complete their draft, then edit, polish, and plan their release for later in the year, or target specifically for the holiday season.

I’ll propose that collecting this data is not as hard as it might seem. Hugh Howey at www.authorearnings.com has done a tremendous job in scanning and crunching the sales data from Amazon. Maybe authorearnings could ask their data spider to check for page count, too.

My suspicion is that the giant wave of books might have a lower combined sales ranking than the fewer, more patient books released later in the year.

So where do we go from here? For another perspective, we could compare these sales rankings to books that are of longer length, say between 75,000 and 100,000 words. Or, compare the NaNoWriMo 50,000-word books that are indie published to those that are the same length, but are traditionally published. For stats, NaNoWriMo.org says that since 2006, there have been dozens of traditionally published books first drafted during NaNoWriMo, and countless self-published titles (3). [A quick side thought: dozens published does not seem like that many after eight years and a cumulative participant effort of many hundreds of thousands of writers.]

Mark Coker, CEO, Founder and Chief Author Advocate at Smashwords released his 2014 Smashwords Survey after examining $25 million in customer purchases aggregated across Smashwords retailers. He found that, “Although the bestselling books tend to be over 100,000 words, readers don’t purchase by length alone, so don’t write longer if the story doesn’t demand it.” (4).

On the one hand, this leaves an impression that NaNoWriMo novels at 50,000 words are not the biggest sellers.

On the other hand, there are many experienced authors who use NaNoWriMo as a kick-start to completing the rough draft which they will then take the greater time to turn into a larger, more successful novel that resonates with readers. I haven’t participated in NaNoWriMo, but I know from experience that such a singular, intense focus on writing helps me create deeper, richer worlds and characters. My upcoming sci-fi novel, which is with the proofreader now, took me nearly two years to write. There were times when I was so engaged in writing that I could stare blankly at someone speaking directly to me, but only see the lips moving of a life I envisioned only on paper. Anyone else wake up their spouse with the sound of a clicking pen on the nightstand? Try that for two years. Here’s your nanowrimo right here on the couch! Sorry…. Back to the analysis.

I support any means for an author to write. And for those who finish the NaNoWriMo challenge, please don’t swamp the boat with a hurried draft. Take December off, pick back up in January and bring an equal passion to making your book the best work it can be. Have it professionally edited. Commission a professional cover. Then sound the starting whistle and let the sales begin.

But after all this, if there’s still a fair share of those 33,000 writers putting their book to market at the same time I’m out there looking for a small piece of the shelf… can someone please send up a warning flare so I can duck behind my wheel and turn my bow into the wave?

Funny enough as it sounds… I’m a good, but not that good of a swimmer.

PS: In the spirit of NaNoWriMo, I wrote this post in one sitting, no break, no review, just moving forward.  With friendly comments, I’ll edit it in time.

This site uses Akismet to reduce spam. Learn how your comment data is processed.