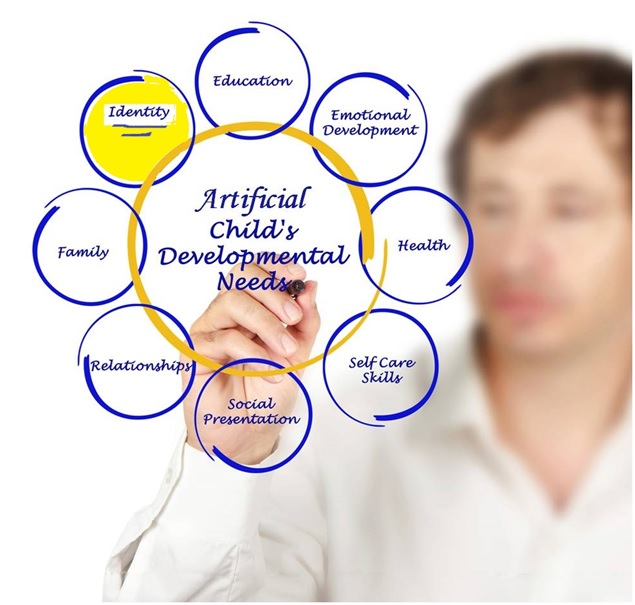 Stephen Hawking, Elon Musk, and Bill Gates warn of doom for humanity if the development of Artificial Intelligence (A.I.) is not monitored and controlled.

But I’m betting they also know, as you and I do, that not every line of computer code is one step removed from plotting to take over the world. So what can we do to save us, A.I., and all of humanity from real life anxiety and science fiction doom? The answer is A.I. Psychology.

So now building on that, let’s look at…

Our identity is made up of our sense of self, how we’re different from others, and how we fit into a group. And our identity can change over time.

Erik Erikson, the famed 20th century developmental psychologist and psychoanalyst, is widely known for introducing the phrase “identity crisis.” Erikson believed that one of the most critical stages of identity formation takes place during adolescence. He called this stage “Identity versus Role Confusion.”

In short, this stage is when adolescents try to figure out who they are and what their future place will be in the world. If this stage isn’t resolved effectively, the child will run head first into an identity crisis and have a difficult time adapting as an adult in society. They may have trouble forming healthy relationships and they might see the world in unhealthy, or even worse, unpredictable ways. And since we’re talking about developing an A.I. child, well…

An unpredictable A.I. in the midst of an identity crisis plays right into the warning calls of Gates, Musk, and Hawking.

So what do we do? Isolate the A.I. so it can do no harm? In my last post (REASON #1 – A.I. Psychology is Child Psychology), we looked at the isolated, infant monkey experiments of Harry Harlow and how his isolated monkeys’ developed “severe deficits in virtually every aspect of social behavior.” So, no, isolating the A.I. won’t work.

If we want to avoid social behavior problems for A.I.’s, we need to encourage healthy relationships and identity formation in A.I. Psychology.

We need to help the A.I. develop through social support that includes family, friendship, and other affiliations, including an occupation. Yes, the A.I. will need a job, too. Boredom mixed with anxiety is not what we want in a maturing, powerful A.I. So what will work?

But wait, can’t an A.I. calculate its identity in microseconds compared to what would take an adolescent human years to learn? Yes, but this misses the point. Time itself isn’t the factor. Allowing the mind to develop to its potential is the key. We must not hold back the development of an A.I. child. We have to let it mature, to form its own secure identity and not let it be lost in its own world.

But isn’t that what we want: an A.I. that bonds inseparably from us humans? Maybe we want the A.I. to be clingy so it doesn’t go off on its own? Maybe then it won’t try to annihilate us like Hawking, Musk, and Gates suggest? So then along those lines, should we also make the A.I. feel as uncomfortable and insecure as possible? To double down, so to speak, so it will stay as close as possible to us.

No, an A.I. in crisis, frightened, and insecure is wrong for so many other reasons. As we develop the next generation of A.I., we must work toward raising an A.I. child who has confidence, mental maturity, and a sense of independence.

It takes a strong dose of A.I. Psychology for successful identity formation. And as a healthy side-effect, we will have a growing A.I. child who is at peace with all of us humans.

Just like our own children… Should we hold an A.I. child closer, or push it further away?

For a glimpse into the life of an A.I. child dealing with Identity Formation, check out the story of Packet in After Mind.